Porcupine Tree's new live film is approaching completion and a special edition will be available in April, with a regular version to follow in May. Anesthetize was filmed live over 2 nights in Tilburg, The Netherlands in October 2008, at the end of the Fear of a Blank Planet tour. The 130 minute live film includes a complete performance of the Blank Planet album and 11 other tracks, and was directed and edited by Lasse Hoile on high definition cameras, with the soundtrack mixed into stereo and 5.1 sound.

The special edition will take the form of a cloth bound hard back 120 page book (as per The Incident and Insurgentes deluxe versions) featuring live photography of the band taken over the last 5 years. The book will house both a DVD and a much higher quality Blu-Ray disc version of the film, as well as 2 audio CDs of the soundtrack including one bonus track not featured in the film. The book and audio CDs will not be included with the standard retail versions of the Blu-Ray/DVD. 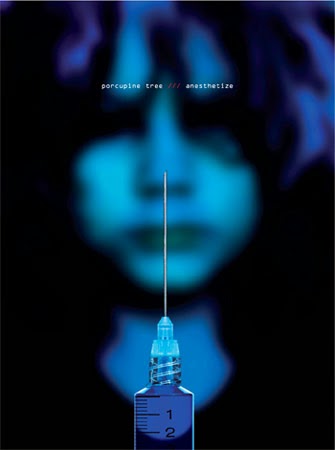