twice around the world

Theo Travis has a new book out from two+ years of extensive touring with Steven Wilson. The book features diaries and lots of images taken by Lasse Hoile, Diana Nitschke, Joe del Tufo and Claudia Hahn. 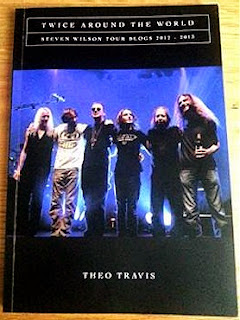 "This is a glossy 136 page deluxe and limited edition book of the 2012 Grace for Drowning and 2013 The Raven That Refused to Sing tour blogs written by band member Theo Travis. The book includes all of Theo's fly-on-the-wall diaries written on the road, many of which first appeared on Facebook.
The entries are revised and expanded for this unique souvenir and additional entries appear for example for the Loreley Festival 2013 and the Australian tour of October 2013. The tours travelled to 21 countries in all, and the book also includes Theo's exclusive, previously unpublished account of recording with the band in Hollywood, Los Angeles, U.S.A. in September 2012.
The book features over 180 photos, by top photographers Lasse Hoile, Diana Nitschke, Joe del Tufo and Claudia Hahn, with others from the personal archives of Theo and other members of the band. Many of these photos have never been seen before.

The Steven Wilson 2013 tour was voted Event of the Year in Prog magazine. In this unique and limited edition book written in Travis' candid and relaxed style, he takes you on this amazing road trip, giving unparalleled access to one of the greatest Progressive bands in the world today"